For illustrative purposes, we take into account a dataset derived from the article by James M. Potter, Communal Ritual and Faunal Remains: An Example from the Dolores Anasazi, Journal of Field Archaeology, 24(3), 1997, 354-64. The dataset can be found on page 360 (Table 2). It reports the number of identifiable specimens of 4 major taxonomic groups for each roomblock within the Puebloan McPhee Village (in the US Four Corners region). The author wished to address the expectation concerning the abundance of certain taxonomic orders across the site. In other words, for the sake of any subsequent anthropological/archaeological interpretation of the patterns of utilization of different animal species, the analyst was interested in exploring the degree to which different faunal remains "correspond" to different sector of the village.

The dataset (available HERE) is reproduced here, with two slight modifications: (i) the original name of the roomblocks have been sustituted with simpler labels (roomblock 1, 2, etc.); (ii) a fifth category (corresponding to the average colum profile and labelled dummy_sp[ecie]) has been added just for illustrative purposes, to make evident what a profile similar to the average one will look like in the CA scatterplot.
The dependency between rows and columns can be considered important (i.e., strong), since it is above the 0.2 threshold (actually, 0.314). See the chart below. Further, the chi-square statistic is equal to 265.42 (df 20), which is highly significant (well below alpha 0.01). 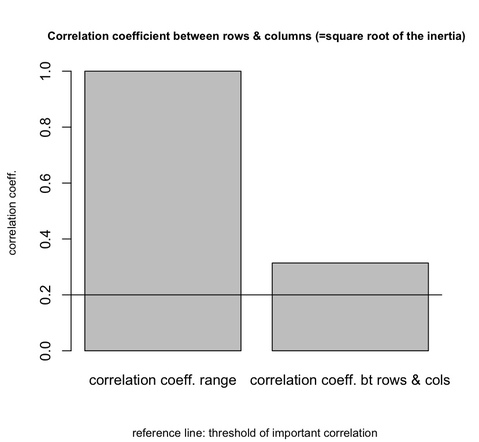 CA allows to isolate one main dimension of variability in the data. In fact, one out of the 4 dimensions turns out to account for the majority of the inertia (actually, 95.9%). 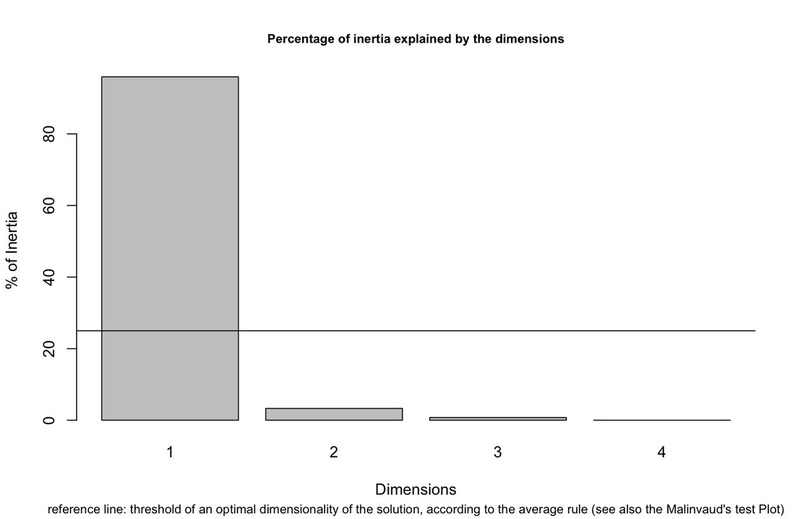 The 1 dimension is the only one that appears to be significant according to the scree plot, the so-called average rule and the Malinvaud's Test (all discussed earlier in this site). The chart related to the latter test is shown below. 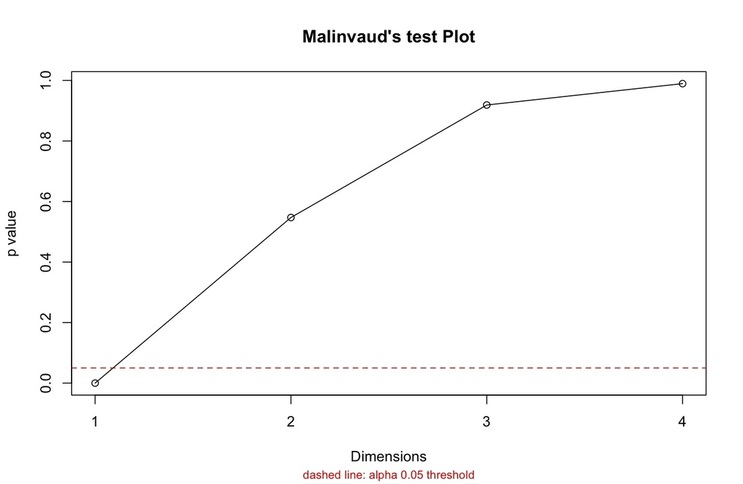 Since we are interested in understanding the similarities between roomblock as far as faunal species remains are concerned, it could be decided to interpret the position of the roomblocks in the sub-space defined by the faunal species (i.e., column categories).
As shown below (left) by the Standard Biplot (discussed earlier in this site), the opposite poles of the (dominant and significant) first dimension are determined by two species: Lagomorph (negative pole), Artiodactyl (positive pole). The second dimension is determined by Aves and Carnivore. The same information can be also derived from the two bar plots further below, which dysplay the contribution (in permills) of faunal species to the first two dimensions, with the reference line indicating the threshold above which a contribution can be considered worth considering. Incidentally, it must be noted that the contribution of the dummy species is practically nihil: since it corresponds to the average colum profile, it does not contribute in differenziating between roomblock's assemblages.
It must be kept in mind, however, that  the second dimension accounts for a very low proportion of the total inertia (actually, 3.3%). This can be appreciated by inspecting: a) the Standard Biplot (below, right); b) the dot chart provided by my '﻿﻿﻿CAinterprTools﻿﻿﻿' described in this same site (see figure further below). In the former, the vectors representing the species (i.e., column categories) have colour intensity proportional to their absolute contribution to the total inertia. It can be seen that, while Aves and Carnivore have a high contribution to the definition of the second dimension (proportional to the lenght of the vector), they have a low contribution to the inertia (i.e., variability) of the table overall (proportional to the colour intensity, as said). The dot chart provided by my 'CAinterprTools' package allows to appreciate in a very straightforward way that the two mentioned species have an important contribution to the definition of the 2 dimension (solid circle) while they are poorly contributing to the total inertia of the data (hollow circle). 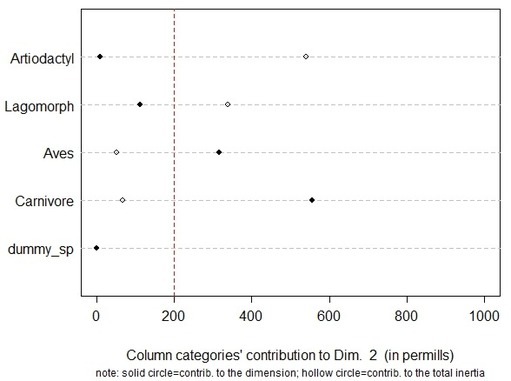 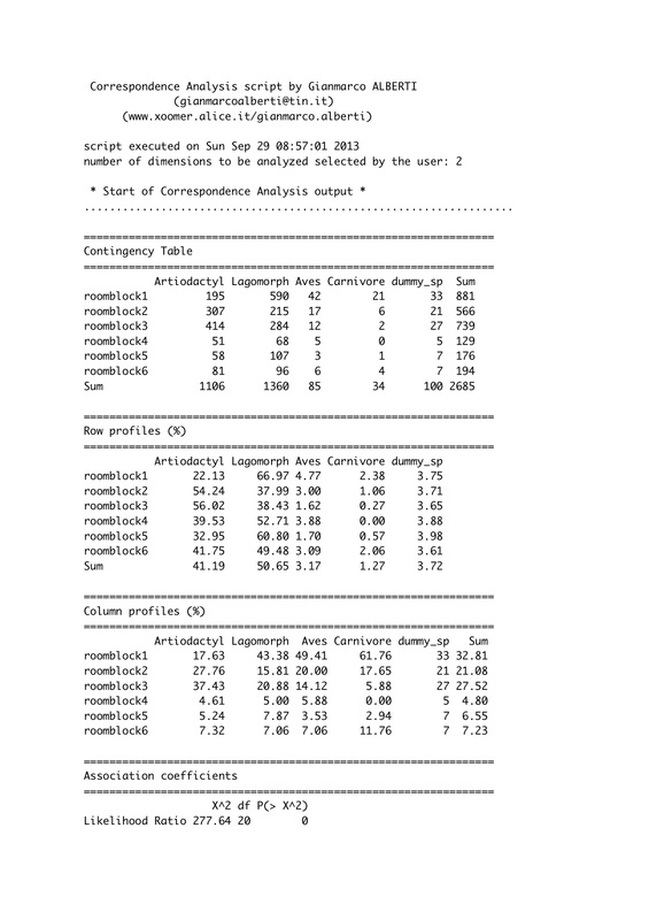